– a report by John Tollitt (with John’s photos) 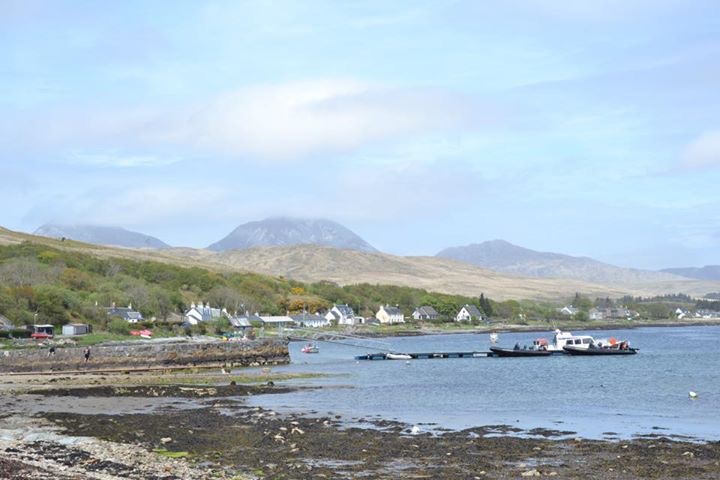 In an attempt to avoid the Eurovision Song Contest and the finale of the most depressing football season ever, I decided to spend the weekend of the 24/25th May on a remote island with severely limited connections with the outside world. The Isle of Jura fitted the bill to a tee, and, as an added bonus, it hosted its annual Fell Race that weekend so a win-win situation!

So first off, a few Jura facts:

– George Orwell went to Jura to recover from TB and it was where he wrote 1984.

George Orwell wasn’t far wrong in his description and we nearly didn’t ‘get’ there as we discovered the ferry we would need to get there by car was fully booked (if taking a car it is necessary to get 2 ferries and go via Islay as Jura has no direct vehicle ferry link with the mainland). Fortunately, a call to Nicol the Boatman secured us a place on his boat from Tayvallich (the middle of nowhere).

Me an Mrs Badger made our way to Tayvallich in plenty of time for the 12.00 crossing and decanted all our gear and bikes onto the jetty awaiting the arrival of our vessel. We were also awaiting the arrival of some decent weather as the cloud was low and the rain showers were frequent. A pair of small boats arrived and we boarded along with other running types and the post-race Ceilidh band. The hour long crossing was spectacular, if a touch choppy. We arrived at Craighouse, Jura’s main town (well only town really) which largely consists of a hotel, a distillery and a community shop, and struck camp. The campsite is on a small stretch of grass between the hotel and the sea. Not too shabby a spot. This makeshift campsite steadily grew as the 200 or so competitors arrived by various means but with the bicycle/ boat combo proving a popular mode of travel. The options for accommodation are basically the hotel and camping but, seeing as the hotel gets booked up a year in advance for the Fell Race weekend, the only realistic option is camping.

The weather the following morning wasn’t looking promising as the Paps were still shrouded in cloud. I attempted to familiarise myself with the route as I was aware there were a few crucial route choices necessary to avoid unstable boulder fields and precipitous drops. I picked the brains from a few familiar faces I spotted (Stewart Barrie of HBT and Andy Blackett of DFR) before we were set off from outside the distillery on a track which soon turned into marsh taking us into the cloud and summit of the first hill Dubh Bheinn (530m). The field had already thinned out so I tried to stick with a bloke who seemed to know his way round the route. The next 2 hills were both in cloud and included some an exhilarating scree run descent. The first of the 3 Paps, Beinn a Chaolais (733m) came into view descending Aonach Bheinn (499m) and was thankfully free of cloud. It also looked absolutely huge. The line of brightly clad runners threading their way up the base only served to give it a sense of scale. A fellow runner pointed out that the prelude was over and we were about to start the main event. 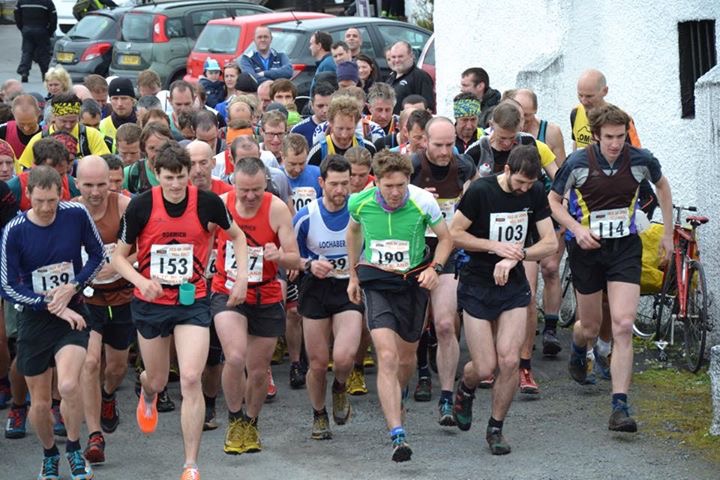 The ascent of ‘Pap 1’ was steep and seemed to go on forever, at times hands as well as feet were involved with the scramble to the summit. A gaggle of hardy marshals at the top took a numbered token from each entrant in order to account for the whereabouts of everybody taking part. These people manning checkpoints at fell racing events are the unsung heroes of the sport, spending long hours manning, often cold, wet and wild locations for hour upon hour, ensuring the safety of competitors for little or scant reward other than their love of the sport.

The next few hours were something of a blur, but consisted of another 2 lung-busting ascents and 3 thigh-straining descents of the next 2 Paps, namely Beinn an Oir (785m) and Beinn Shiantaidh (757m). The last descent was particularly tricky as it was down loose scree and small boulders which is hard work on tired legs and requires a great deal of concentration. 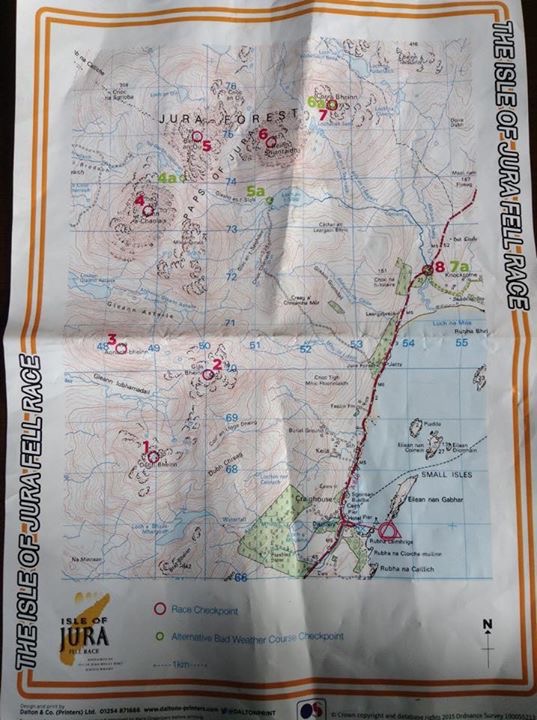 The final hill, Corra Bheinn (573m) is a cruel addition to the route as it takes you in the opposite direction to your ultimate destination. My legs were starting to feel pretty heavy coming off this last hill. I was being overtaken by a number of people, including Stewart Barrie who scored me 5.7 on a tumble I took as he flew passed me. The approach to the 3 arch bridge became increasingly boggy and testing on increasingly tired legs. It also included a thigh high river crossing on slippy boulders. The bridge proved to be something of an obstacle course as it involved clambering over some steps over a deer fence and passing under the bridge before passing on another tag to a marshall. As planned Vicki was waiting at the bridge with my trump card, namely a pair of road shoes, a change of socks, a bottle of water and some Jelly Babies. The change of footwear seemed to serve as a bit of a boost for the final 5k on the road as I picked off 7 or 8 people and felt strong and comfortable with Vicki accompanying me on her bike. 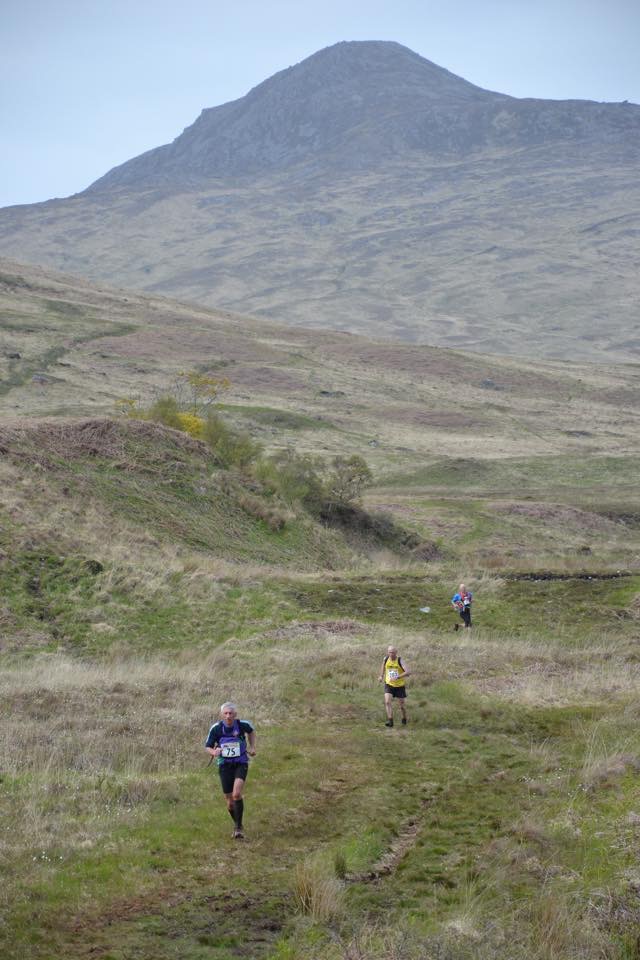 I finished in a time of 5hrs 28mins in 127th place out of 200. The winner was Finlay Wild of Lochaber in a staggering time of  3hrs 13mins. The women’s winner was Carnethy’s Jasmin Paris, smashing the women’s course record in a time of 3hrs 38mins. and 5th overall in a quality field. Having collected my race t-shirt, I set to work refuelling on the hearty array of tea, cakes and sandwiches on offer in the distillery cooperage. This was swiftly followed by some all important re-hydrating ale.

The evening’s entertainment was provided by a local variation of the 1970’s game ‘ How many students can you fit in a Mini’ namely ‘How many fell runners can you fit into the Jura Hotel bar?’ The answer is a lot.

This is more than just a race as the logistics mean that you have to spend some time on this lovely island. There is a real communal atmosphere to the whole event as everybody mucks in together, on the campsite, during the race and in the bar afterwards. I would definitely fancy having another crack at it and might even make it to the post race ceilidh (which apparently didn’t get going until 01.00am).