Having already completed races up the biggest mountains in Northern Ireland and the Republic of Ireland, next on my list was the Ras Ryngwladol Yr Wyddfa or the International Snowdon Race to non Welsh speakers. Regular readers may recall that this is part of my hare-brained plan to do a race up the highest mountain/hill/fell in the component parts of the British Isles culminating in the Scafell Pike race on my 50th birthday.

The Snowdon race, now in it’s 38th year, goes from Llanberis to the summit of Snowdon and back, with a record time of 62.29 which has been held by Kenny Stuart since 1985.The race attracts top runners from all over Europe and is televised on Welsh speaking SC4. This year there were national teams from England, Scotland, Wales, Northern Ireland, the Republic of Ireland, the Isle of Man and Italy competing. An additional, uphill only race, finishing on the summit, the Snowdon Super Cup, was added to the day’s events. Mountain running in Europe is generally uphill only and someone I spoke to suggested that this was to add credibility to the event on the European mountain racing circuit. I arrived in Llanberis in plenty of time, and watched the start of the Super Cup race, which set off at 11 am. It was already pretty hot, with North Wales basking in 30 degree temperatures the previous day. I was trying to make sure that I kept on supping water so as to avoid dehydrating during the main event that was due to start at 2pm. Having picked up my number and t-shirt, I had a warm up with fellow Tyne Bridge Harrier David Beech (who had spent his honeymoon doing a recce of the course). Although not as hot as the previous day it was still blisteringly hot as the start time approached and She Who Must Be Obeyed nagged me into covering my vulnerable bits with a liberal dosing of SPF 50. 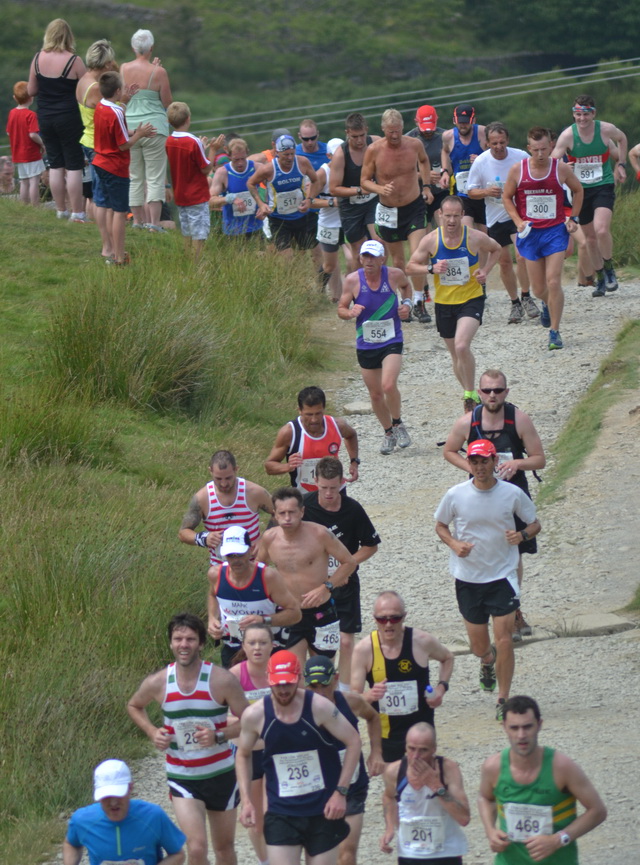 The race started bang on time and made it’s way out of the field where the start and finish were located. Big crowds cheered us through the streets of Llanberis. The event really seems to capture the imagination of the locals and put a few quid into the pockets of local bars and drink vendors. Soon we found our way onto a narrow tarmac road that started climbing steeply and continued to do so for a few kms. On a bend in the road we turned off onto a stony track. I managed to pick out Vicki amidst the throng of noisy, well lubricated spectators, and forced a smile and wave for her camera. The path continued to ascend, though never as steeply as the initial stretch of tarmac, and so was still runnable. As we passed the Halfway Cafe the path steepened and people around me started walking rather than running. I managed to pick up quite a few places with the good old head down, hands on thighs walking technique beloved by us fell running types. We got a bit of a boost from the waves and cheers from the passengers on the descending mountain railway, which brought back memories of last year’s Jungfrau Marathon, and the view that appeared as we passed under the track was a stunning one as we looked down into one of Snowdon’s impressive north facing corries. To be fair, any view at all for me, in Snowdonia National Park is a bonus as my few trips to that area have always been noteable for rainfall and non-existent visibility.  The summit approach was a mixture of walking and running with whistles alerting us to the descent of the now returning race leaders, the first of which was 5 times winner Andi Jones, followed by last year’s winner Murray Strain. As we approached the summit we were actually running on the railway track before a sharp turn to the right to ascend the pointy top of the highest point in England and Wales.

It was quite tricky adapting yourself to the descent as it was pretty crowded at the top with runners ascending as well as walkers and spectators milling around. I pretty soon got into my stride descending the rocky path and managed to initially pass a few descenders. At one point I lost my footing and thought I was going head first into the path, but I fortunately managed to stay on my feet for the descent. I think I probably checked my pace a bit as I felt that getting down in one piece was more important than shaving a few seconds of my time. The descent was fairly straightforward, although it demanded full concentration and also it was becoming noticeably warmer the lower you got. As we approached the junction with the tarmac road, the size of the crowd of spectators increased as did the volume of their cheers. Hitting the tarmac was quite a relief after the rough stony track. The steepness of the road, however, made it quite tricky to find the appropriate stride, but I was glad that I had chosen to wear road shoes rather than fell shoes at this point. 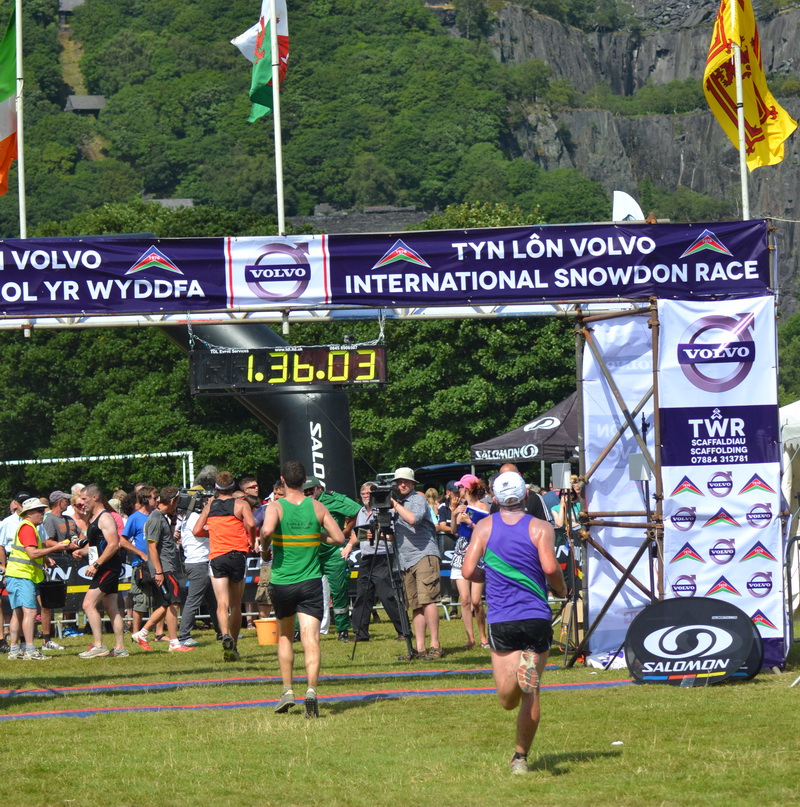 As the road levelled out into Llanberis I could hear the tannoy announcements from the finish area so tried to push on and catch up with the runner in front of me. I didn’t quite catch him, but the finish was fantastic as the funnel was lined with spectators and the finish line had a big arch and timing clock. Crossing the line in just over 1.36, I was doused with water by a marshall before being directed to shelter from the sun and partake of the fruit and drinks on offer. Another nice touch was a vintage fire engine spraying us with their hoses which was  most welcome. 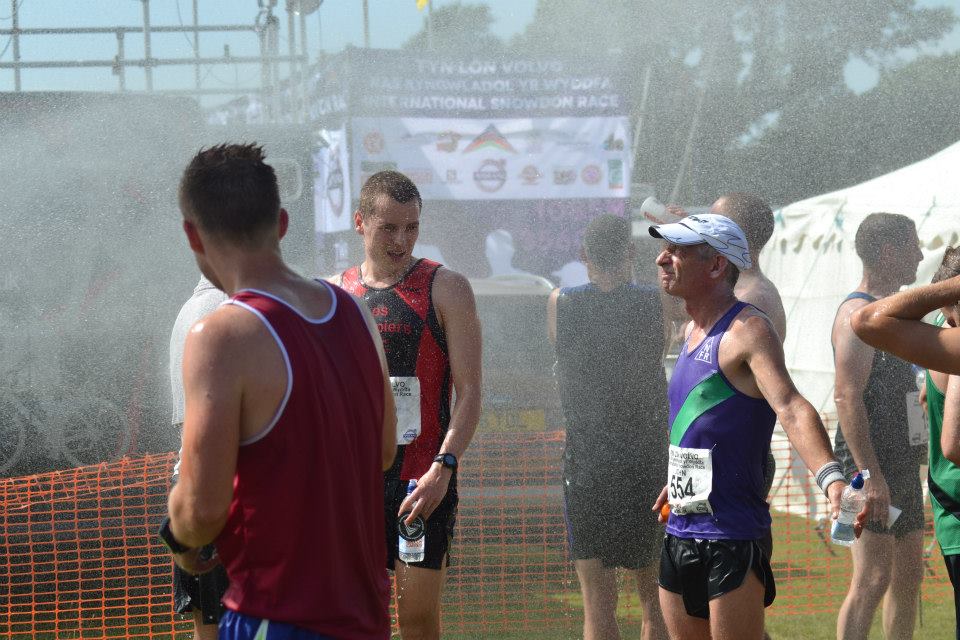 All in all a great event and a great day. I finished in 123th place with a chip time of 1.35.57 which put me in the top quarter and 13th in my age group. The men’s race was won by England’s Andi Jones whilst Ireland’s Sarah Mulligan won the women’s race. So that’s three down, two to go and next up is the biggie, Ben Nevis, on September the 7th.