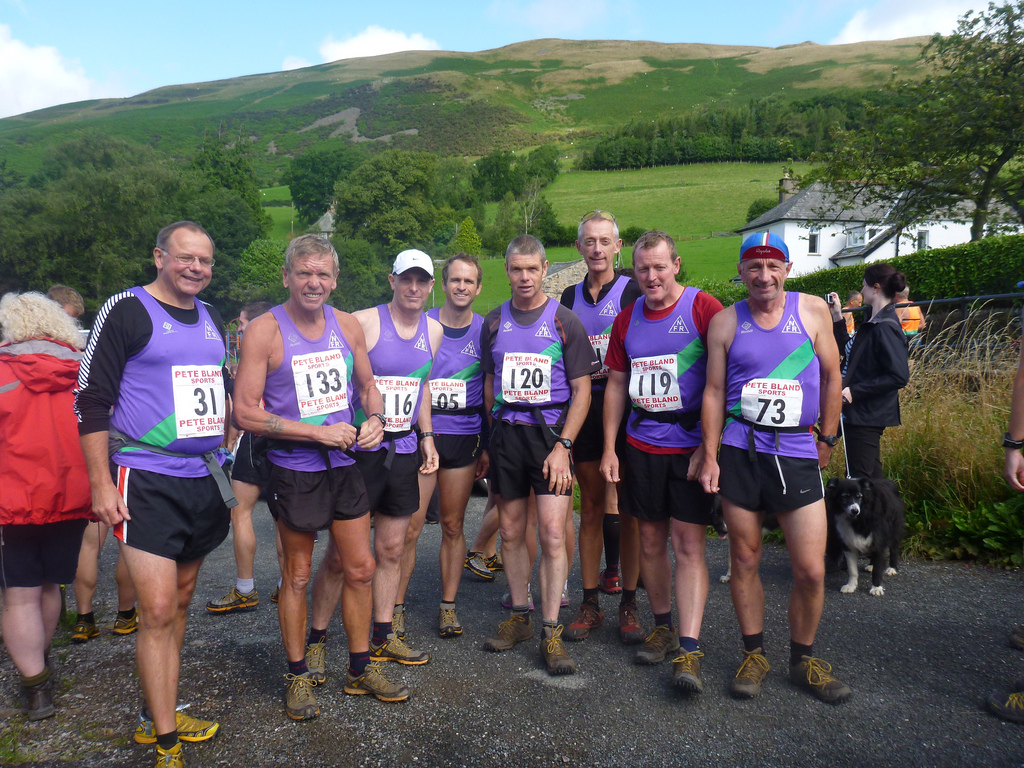 I travelled over with John Tollitt along with Trevor Wakenshaw of NS Poly who slept all the way there and all the way back! The weather was fine on Tyneside but some heavy rain and low cloud on the Pennines seemed to confound the good forecast for the race. Fortunately the forecasters were proven right and by the time we reached Sedbergh the sun was shining and it was to stay dry but cloudy for the duration of the race.

Apart from the two of us, the only other member we knew of who was doing this championship race was Andy Russell. We hadn’t heard anything from him, but it seemed a safe bet because he turns up for at least a couple of races every weekend! We weren’t disappointed because he was the first person we saw and when we eventually found the start. It was also a pleasant surprise to see six other NFRs, milling around the starting field.

Sedbergh Hills had been one of my first ever AL races in my first year of running in 2008 so I wanted to better my showing on that day, and I was pleased to see a few personal “rivals” in the field. One a lad called Adrian from Dallam who usually beats me but not by much, said he was still suffering from a recent ultra race so I decided to try and stick with him for as long as I could.

After a brief briefing from the organiser Jon Broxap we were off and running up the road to the fell. A gently rising traverse follows taking you around Winder and then there follows a stiff climb, the first of many, onto Arant Haw where I gradually caught up with my rival. I surprised myself by actually passing him on the best downhill run of the race to Chapel Beck which today was a surprisingly deep and swift flowing stream. It claimed a few victims including Mr Tollitt and yours truly.

Castley Knott came and went almost unnoticed and I felt good on the long around the eastern edge of the Howgills to checkpoint 3. I was still ahead of my friend but he caught up on the descent to Langdale Beck where I began to feel tiredness creeping in for the first time. Allon Walsh also caught up hereabouts and powered on ahead.

But my personal war wasn’t over yet. I drew level with Adrian on the climb up by Hazelgill Knott where he confided to me hat he was totally knackered. That cheered me up a bit, but not for long because he soon made a miraculous recovery, (either that or he is an inveterate fibber), and came storming past me on the steep descent to Checkpoint 4. That was the last time I was to be anywhere near him as he drew inexorably ahead on the never ending climb to Calf Hill.

It was this that finally did for me. Soon after starting I swear I could feel my strength ebbing away with each torturous upward step. Too late I realised that trying to keep up with Adrian had been a very bad idea. But yet as the climb steepened I was sure I was gaining again. Maybe I had been but by the time I reached the summit he had disappeared into the distance and I was suddenly all alone with no other runner in sight. I set off down, gradually accelerating to what could best be described as a rather arthritic hobble. I was not happy.

In fact as I contoured around the hillside approaching Arant Haw, I was on the point of giving up the race when Peter Reed caught me. His encouragement spurred me on a bit and I managed to keep close to him until the start of the final climb of the day up to Winder summit where he forged ahead leaving me all alone again. I wasn’t looking forward to the final descent which gets quite steep and in fact my subconscious no doubt trying to avoid the inevitable for as long as possible kept me on the gently graded walkers path for rather too long. Fortunately I saw a Dark Peak runner cutting straight down to my left and latched onto him.  Despite my tiredness or more likely because of it, the descent did get slightly out of control but fortunately there was a conveniently placed dry stone wall to check one’s impetus.. A brief trot back along the road and it was all over and time for tea and cakes.

I had forgotten what a tough little so and so this race was. I felt more knackered at the end than I had at Borrowdale a fortnight before! It had definitely been a mistake to try and keep up with a faster runner and I certainly paid the penalty later on. Despite or maybe because of that, at least I did manage to finish in a slightly faster time this year.

The race was won by Robb Jebb in about two hours and I have it on dubious authority that first NFR home, Mr Shillitoe claimed the 3rd Ladies prize. John Tollitt was next in, followed, I think by Steve Minnikin or Paul Appleby.