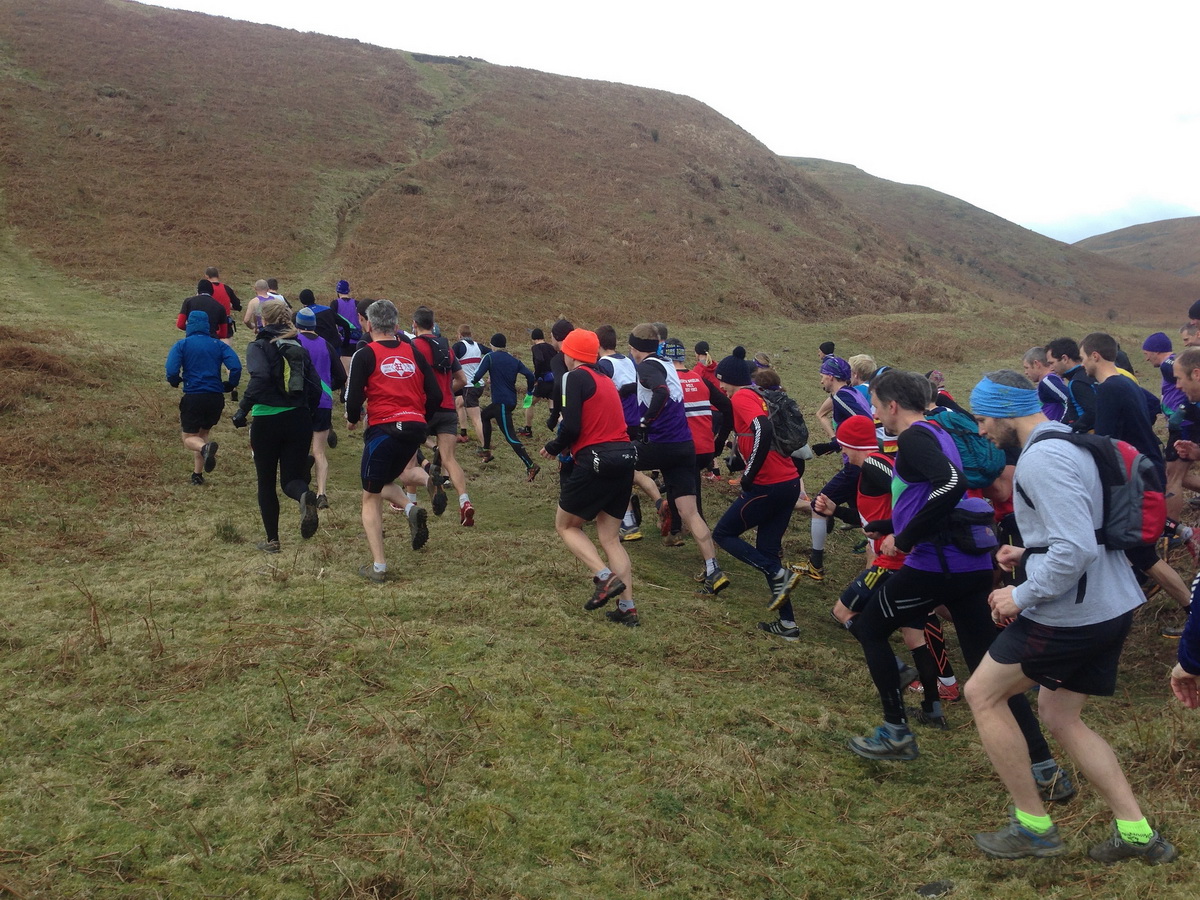 Organiser’s Report from Will:

“It was a clear but windy day which brought the ambient temperature down to the point where you’d quickly get cold if you weren’t moving. The wind meant course-setting took longer than planned and by the time we got back to the car park it was already busy. Stands from Trailguides.co.uk and H18 Off-Road Running provided a welcome distraction to a long queue of runners. With some improvised administration we managed to get all 116 registered and ready to go by 10am. A top-notch field in both the men’s and women’s races was assembled and there were just as many determined faces as there were relaxed ones. On the starter’s whistle the first steep bank was taken, some in what looked like a few strides, others at a more leisurely pace. A leading pack of five or so was quickly established and after some to-ing and fro-ing throughout most of the race it was Beech and Simpson who would prevail for the final dash to the line from the Brough Law hillfort. In the end Beech’y made good on his pre-race proclamations and his recent form by taking his first win here. Graham Simpson was close behind and thereafter followed a steady stream of runners all looking windswept and smiling. Emma Bain ensured an NFR-double by mixing it with the fellas at the front of the field and showing many younger runners how to do it, again continuing her excellent results of the past year or so. A large contingent from Durham FR and some good packing at the front meant that the team prize, had there been one, would have gone south. Times all round were fast but the wind kept the course records safe for another year at least. As the race was the first in the 2015 North East Championship it provided a good opportunity to present the 2014 medals, which was all the better given just how many champions and medal winners, past and present, were in attendance. A small surplus from race entries has been donated to the Amphibian & Reptile Conservation Trust which I felt was relevant given the annual spawn in Little Cleugh which the route crosses on the descent from Cochrane Pike. Many thanks to Austin & Casper who both helped mark the course, and of course to John Butters who is the new race organiser, also the farmer, Johnnie Wilson, and his son Ross Wilson (9th overall), who give us permission and helped out too. This race has now topped 100 entrants for two years running and I am pleased to hand it over in such good health. Thanks, Will.”