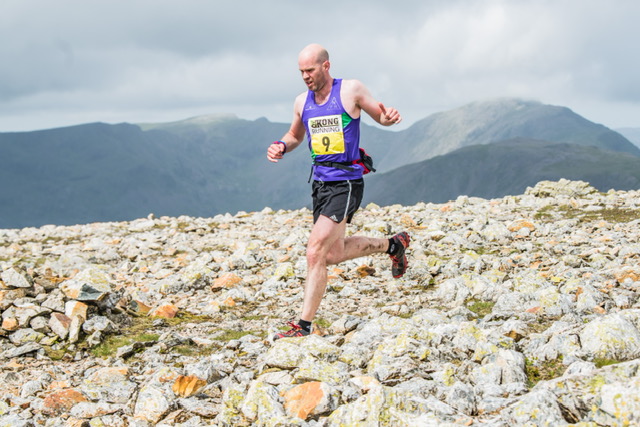 I can’t remember writing a race report before, but this time felt right for various reasons not least because I was the only NFR entry and because as many know I suffered from a long-term fatigue related illness for a good few years under the umbrella of CFS/ME which proved very challenging to recover from. Thankfully I’ve found some consistency again and I’m enjoying my running and the socialising it affords at races, meeting new people and seeing old faces. However, to enter a long lakes race for the first time in years felt like a real challenge especially as I’m still feeling my way with fitness and training volume.
The Great Lakes fell race is one I’ve always wanted to do it’s just that the opportunity has never really presented itself. I’d been training well in recent months without big mileage but training relatively effectively with specific sessions, gradually increasing long runs, resting well and even including something resembling the odd speedwork session! I’d had to bail at Coledale due to a bug but ran the Newlands Memorial (formerly Waltz) in April and then Buttermere Sailbeck early May placing relatively well given a lack of any racing for some time. I’d given Great Lakes some thought but the sheer difficulty of it and it being described as a “monster” by various sources including hardened veterans of this club definitely caused some apprehension. Looking at my running log, (yes I’m a luddite and write training down as I don’t use strava) I figured I’d got enough long runs in to at least get round and having completed a couple of races already I had some decent fitness. Speaking to a few stalwarts convinced me to have a bash.
I turned up for kit check and had a chat with Ben who organises the race and who I’d sought advice on Wasdale back n 2014. Looking around in the valley before the start I did feel I’d got lucky with the weather in that I wasn’t going to melt in the heat nor was I going to be running in the pissing rain and clag for hours. You win some and lose some as they say, I’ve had both before. Looking around the starting field of 80 or so there were some hardened looking runners but I guess you don’t just rock up and run something like this or other races of similar nature. Off up the Band we went and I felt like I’d taken up a sensible pace power walking early sections and running where I could but I was taking a very relaxed approach and not timing the race. My breathing felt good and I didn’t feel like I was pushing into the red at any point. I caught up with a group containing Jacob Tonkin from Keswick & further up ahead I could see Paul Cornforth from Ambleside setting a steady pace. I was able to run the flatter sections of the band higher up and pushed on to the summit feeling fresh with stunning views around albeit a strong wind. I ended up taking the tourist path with others despite reccying the official race route.

A group of about 4-5 formed coming off Bow Fell which was joined by Matty Atkinson of Keswick on the climb of Esk Pike who was running support for Jacob. Looking around I figured I must be doing alright to be in their company particularly with Cornforth powering on a little way ahead and runners were already very strung out. I ended up having a good chat to Matty who explained he was having a weekend “off” (aye right) with Buttermere next weekend and he was kind enough to offer some jelly babies and support while we chatted heading to Sca Fell pike further on. The group had pushed on to boulder wasteland of Great End summit and then Sca Fell pike summit where Sabrina Verjee was marshalling on the summit. The bemused look on people’s faces as they see runners approach the summit in fell races is always amusing. I still had no sense of the legs giving in to the ascent, descent and boulders and had been able to lead the group for sections from Great End running with a sense of relaxation from Bowfell but knowing that I’d probably hit a bad patch at some point.

After the hustle and bustle of Sca Fell pike summit we pushed on to Sca Fell summit by way of Foxes tarn which for anyone whose done this will concur it’s a bloody grind of a gully scramble on tired legs followed by a leg sapping power march up the remaining climb to Sca Fell summit. We were greeted by an extremely excited Scouse bloke hurling expletive words of encouragement along the lines of “you lot a “f-ing” mental and you’re “f-ing machines” much to the amusement of runners. I pushed on on the descent to Slightside trying to keep Paul Cornforth of Ambleside in the distance and a lad from Settle Harriers. Mr Settle took my recce line from Slightside as per the map, Paul darted to the left down Horn crag……I decided to follow and could see further down the gulley another 5-6 had gone the same way. A tough boulder, scree ridden line which blows the legs up but takes you nicely onto the Eskdale race line if you’ve managed to stay upright! I’d never have known to go this way particularly in the clag.

The bog and long grass of Eskdale proved to be a killer as it’s the perfect proverbial “petrol on flames” for legs knackered from rocky ascent and descent completely sapping energy levels. There are runnable sections but tussocks, long grass and lots of bog drains the life from you. I was feeling very slow and suddenly a bit dispirited as I could see Paul disappearing ahead holding a really strong pace but decided on keeping a fast walk going while I waited for the effect from a gel. I was really trying to keep in touch with three other lads up ahead and as we approached the long (blood long!) arduous climb out of Eskdale up Stonstey Ghyll I decided a further emergency gel was needed as the legs were really struggling but you grind it out and get there in the end. The racing line that takes you just North of Cold Pike where you then pick up the main path down from Crinkles to the foot of Blisco. A runner from CFR had joined me for the descent to the base of Blisco where I was trying to find my running legs where thankfully the shuffle turned into a trot and then a run thanks to the gels and we made it to the start of the Blisco climb. We were joined by a runner from Dark Peak and I settled into a solid pace with him as the lad from CFR clearly feeling good pulled away. By this point I’d scoffed ALL my food but the lad from CFR said he’d only had one bloody gel the bugger before he pulled clear! I could see Jacob from Keswick at the bottom of the climb following us up but we were holding a pretty solid pace and there were no other runners in view. By this pointed I was pretty much on the limit but without having a feeling I’d totally blow a gasket.

A good line off Blisco must be a very difficult in the clag much like the rest of the route but luckily we had good visibility. We took the initial Langdale line to the right then doubled back after the crags to take a left and leading to the final absurd descent down Blisco. It became pretty obvious very quickly that Mr Dark Peak was descending far better than me and taking a “discretion is the best part of valour” approach I decided on trying to avoid completely annihilating myself and getting to the bottom safely at an easier pace as my legs were really starting to feel it. It’s such a steep descent down the face of Blisco that on tired legs you really need to have your wits about you. From the bottom there follows a simple crossing of the Oxendale beck and then up to the bridleway and down back into Stool End farm to the finish.

I didn’t really have any expectations for this race and indeed didn’t time it just running to feel but was very pleased to come home in 21st out of about 78 in a time of 3.29 without completely blowing up at anytime. It’s an amazing, beast of a route, though I can imagine how tough it would be in worse weather. It feels a bit like Langdale but just shove loads more climbing on top! I think the rough stuff probably suits me far better as its more of a grind and because I’m slower than the whippets and fast runners. If you like runnable non-technical races this probably isn’t for you haha but it’s a superb route! It was good to feel the sensation of running strongly on rough terrain in the company of some good runners. In all honesty it was just great being part of the race meeting new people before and after the race and Langdale will also be a special place for me. Indeed, it was my first fell race and first race for NFR in 2013. Needless to say, I skulled a load of Loweswater Gold at the ODG with some of the Ambleside and Keswick lot before retiring to the campsite. A great day out in the lakes.